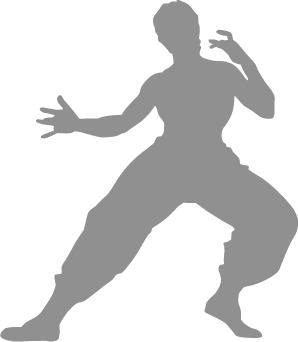 The grand master Bruce Lee, the originator of Jeet Kune Do, advocated “Absorb what is useful, discard what is useless.”

At Deffic, we practice day and night, proudly having with this principle with us.

The logotype designed by the grand master Bruce Lee symbolizes Taijitu, which represents yin and yang.

Yin and yang represents that opposites or contraries that are actually complementary and interdependent, such as female and male, plus and minus, attack and defense, and/or soft and rigid, which can universally be seen in all forms of objects and phenomena in the natural world.

At Deffic, we consider not only the tangible elements such as attack and defense, large and small body movement, or long and short distance, but also intangible conceptions such as material and immaterial all have this contrast that interconnect as one.

Each punch and kick have substantiating logic of how force from one’s body is originated and conducted, and we learn this as tangible technique.

Tangible elements are branches that lead us to learn the core principle, and those are our learning materials.

At Deffic, we learn intangibles behind those such as body control, flow of Jìn (勁), and elements that inter-connect numerous techniques.